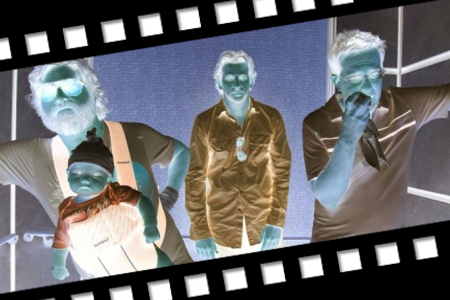 See negative of movie scene and guess the title. Length of words in solution: 3,8
Correct answers: 11
The first user who solved this task is Nasrin 24 T.
#brainteasers #movie #film #cinemania
Register with your Google Account and start collecting points.
User:
Check your ranking on list. In a crowded city at a crowded...

In a crowded city at a crowded bus stop, a stunningly beautiful young woman was waiting for the bus. She was decked out in a tight black leather mini skirt with matching leather boots and jacket. As the bus rolled up and it became her turn to get on the bus, she became aware that her skirt was too tight to allow her leg to come up to the height of the bus' first step.
So, slightly embarrassed and with a quick smile to the bus driver, she reached behind her and unzipped her skirt a little, thinking that this would give her enough slack to raise her leg.
Again she tried to make the step onto the bus only to discover she still could not make the step. So, a little more embarrassed, she once again reached behind her and unzipped her skirt a little more.
And for a second time she attempted the step and once again, much to her dismay, she could not raise her leg because of the tight skirt. So, with a coy little smile to the driver, she again unzipped the offending skirt to give a little more slack and again was unable to make the step.
About this time the big Texan that was behind her in the line picked her up easily from the waist and placed her lightly on the step of the bus.
The pretty young woman went ballistic and turned on the would-be hero, screeching at him, "How dare you touch my body! I don't even know who you are!!!"
At this the Texan drawled, "Well ma'am, normally I would agree with you but after you unzipped my fly three times, I kind of figured that we were friends."
Jokes of the day - Daily updated jokes. New jokes every day.