Chess Knight Move
Brain Teasers
[3408] Chess Knight Move - Find the country and its capital city, using the move of a chess knight. First letter is M. Length of words in solution: 6,8. - #brainteasers #wordpuzzles #chessknightmove - Correct Answers: 41 - The first user who solved this task is On On Lunarbasil 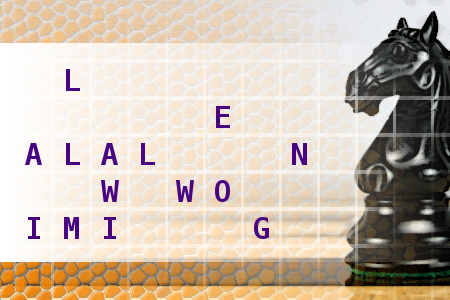 Find the country and its capital city, using the move of a chess knight. First letter is M. Length of words in solution: 6,8.
Correct answers: 41
The first user who solved this task is On On Lunarbasil.
#brainteasers #wordpuzzles #chessknightmove
Register with your Google or Facebook Account and start collecting points.
User:
Check your ranking on list. Three handsome male dogs are walking down the street when they see a beautiful, enticing, female poodle.

The three male dogs fall all over themselves in an effort to be the one to reach her first, but end up arriving in front of her at the same time. They're speechless before her beauty, slobbering on themselves and hoping for just a glance from her in return.

Aware of her charms and her obvious effect on the three suitors, she decides to be kind and tells them, "The first one who can use the words "liver" and "cheese" together in an imaginative, intelligent sentence can go out with me."

The sturdy, muscular black Lab speaks up quickly and says "I love liver and cheese."

"Oh, how childish," said the Poodle. "That shows no imagination or intelligence whatsoever." She turned to the tall, shiny Golden Retriever and said "How well can you do?"

"Um. I HATE liver and cheese," blurts the Golden Retriever.

"My, my," said the Poodle. "I guess it's hopeless. That's just as dumb as the Lab's sentence." She then turns to the last of the three dogs and says, "How about you, little guy?"

The last of the three, tiny in stature but big in finesse, is the Chihuahua. He gives her a smile, a sly wink, turns to the Golden Retriever and the Lab and says: "Liver alone. Cheese mine."