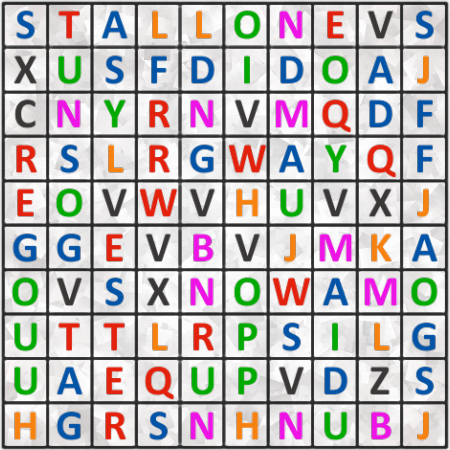 Find the first and the last name of a famous person. Text may go in all 8 directions. Length of words in solution: 9,8.
Correct answers: 50
The first user who solved this task is Sanja Šabović.
#brainteasers #wordpuzzles
Register with your Google Account and start collecting points.
User:
Check your ranking on list. Old Josh was sat in his garden...

Old Josh was sat in his garden, sunbathing in the deck chair when he noticed his grand-son kneeling on the lawn with a worm. When he asked his grandson what he was doing, he found that he was trying to push the worm down the hole from which it came.
"If you can get that worm back in that hole I'll give you ten dollars," said Josh.
His grandson sat and thought for a moment, then rushed into the house. A few minutes later he returned with his mother's hair spray. He picked up the worm by one end and, as he let it hang down, he sprayed it all over with the hair spray. The spray set and the worm became stiff and hard. It was now easy to push the worm back in the hole. Josh was amazed. He gave the boy ten dollars, picked up the hair spray and went indoors.
About an hour later Josh came back into the garden and gave his grand-son another ten dollars.
"But grandpa," said the boy, "you've already given me the ten dollars you promised."
"That's from your grandma," said Josh.
Jokes of the day - Daily updated jokes. New jokes every day.