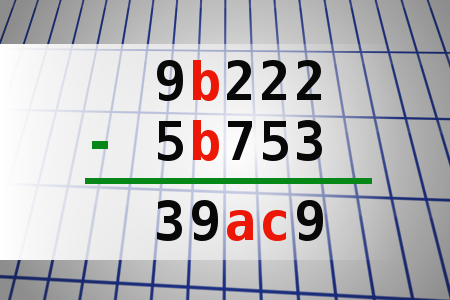 If 9b222 - 5b753 = 39ac9 find number abc. Multiple solutions may exist.
Correct answers: 32
The first user who solved this task is Nílton Corrêa De Sousa.
#brainteasers #math
Register with your Google Account and start collecting points.
User:
Check your ranking on list. A man was driving down the roa...

A man was driving down the road. He passed a traffic camera and saw it flash.
Astounded that he had been caught speeding when he was doing the speed limit, he turned around and, going even slower, he passed the camera.
Again, he saw it flash. He couldn't believe it!
So he turned and, going a snail's pace, he passed the camera. Again, he saw the camera flash. He guessed it must have a fault, and home he went.
Four weeks later he received 3 traffic fines in the mail, all for not wearing a seat belt.
Jokes of the day - Daily updated jokes. New jokes every day.