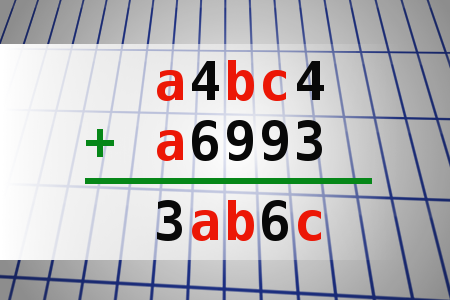 If a4bc4 + a6993 = 3ab6c find number abc. Multiple solutions may exist.
Correct answers: 46
The first user who solved this task is Nasrin 24 T.
#brainteasers #math
Register with your Google Account and start collecting points.
User:
Check your ranking on list.

Two statisticians were travelling in an airplane from LA to New York. About an hour into the flight, the pilot announced that they had lost an engine, but don't worry, there are three left.
However, instead of 5 hours it would take 7 hours to get to New York. A little later, he announced that a second engine failed, and they still had two left, but it would take 10 hours to get to New York.
Somewhat later, the pilot again came on the intercom and announced that a third engine had died. Never fear, he announced, because the plane could fly on a single engine.
However, it would now take 18 hours to get to new York. At this point, one statistician turned to the other and said, "Gee, I hope we don't lose that last engine, or we'll be up here forever!"
Jokes of the day - Daily updated jokes. New jokes every day.