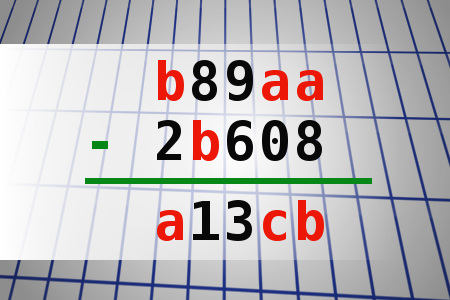 If b89aa - 2b608 = a13cb find number abc. Multiple solutions may exist.
Correct answers: 33
The first user who solved this task is Anas Diab.
#brainteasers #math
Register with your Google Account and start collecting points.
User:
Check your ranking on list. John Smith started the day early, having set his alarm clock (MADE IN JAPAN) for 6 am.

While his coffeepot (MADE IN CHINA) was perking, he shaved with his electric razor (MADE IN HONG KONG), and put on a dress shirt (MADE IN SRI LANKA), designer jeans (MADE IN SINGAPORE) and tennis shoes (MADE IN KOREA).

After cooking his breakfast in his new electric skillet (MADE IN INDIA), he sat down with his calculator (MADE IN MEXICO), to see how much he could spend today.

After setting his watch (MADE IN TAIWAN) to the radio (MADE IN INDIA), he got in his car (MADE IN JAPAN), filled it with GAS (from SAUDI ARABIA) to continued his search for a good paying AMERICAN JOB.

At the end of yet another discouraging and fruitless day checking his Computer (made in MALAYSIA), John decided to relax for a while.

He put on his sandals (MADE IN BRAZIL), poured himself a glass of wine (MADE IN FRANCE) and turned on his TV (MADE IN INDONESIA)...
And then wondered why he can't find a good paying job in AMERICA.

And now he is hoping he can get help from the president (MADE IN KENYA)?
Jokes of the day - Daily updated jokes. New jokes every day.