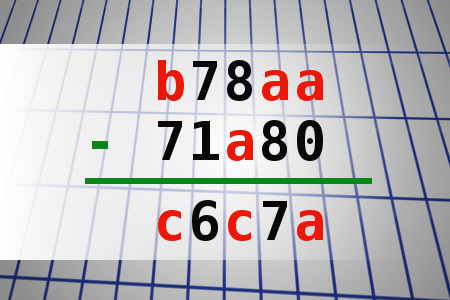 If b78aa - 71a80 = c6c7a find number abc. Multiple solutions may exist.
Correct answers: 21
The first user who solved this task is Nasrin 24 T.
#brainteasers #math
Register with your Google Account and start collecting points.
User:
Check your ranking on list. The middle aged man was visibl...

The middle aged man was visibly shaken when his Doctor advised that he had only 6 month's to live because of the terminal disease that was detected during a recent physical check-up. The Doctor suggested that he should get his 'house in order' , make sure his Will was current and ensure all final arrangements were in place for the funeral. He should then make plans to enjoy what might be left of his life, to the fullest.
"What will you do for the last six months?" asked the Doctor.
His patient thought for a few minutes then replied, "I think I'll go and live with my Mother-in-law."
Surprised by the answer, the Doctor asked, "Of all people, why in the would you want to live with your Mother-in-law?"
"Because it'll be the longest six months of my Life!"
Jokes of the day - Daily updated jokes. New jokes every day.