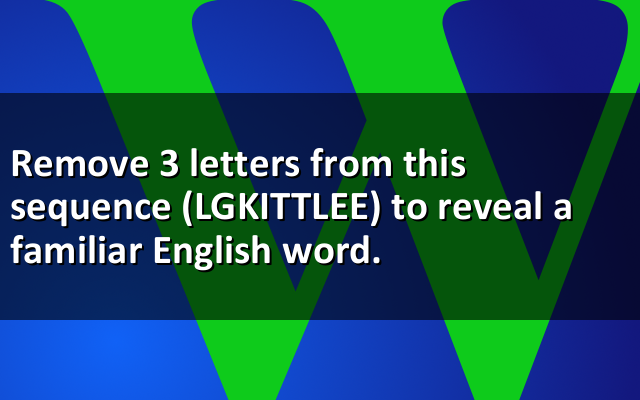 Remove 3 letters from this seq...

Remove 3 letters from this sequence (LGKITTLEE) to reveal a familiar English word.
Correct answers: 23
The first user who solved this task is Nasrin 24 T.
#brainteasers #wordpuzzles
Register with your Google Account and start collecting points.
User:
Check your ranking on list. Two nuns were in the back of the convent smoking a cigarette, when one said,

'It's bad enough that we have to sneak out here to smoke, but it really is a problem getting rid of the butts so that Mother Superior doesn't find them.'

The second nun said, 'I've found a marvelous invention called a condom which works really well for this problem. You just open the packet up, take out the condom, and put the cigarette butt in, roll it up, and dispose of it all later.'

The first nun was quite impressed and asked where she could find them.

'You get them at a chemist, sister. Just go and ask the pharmacist for them.'

The next day the good sister went to the chemist and walked up to the counter.

'Good morning, sister,' the chemist said, 'what can I do for you today?'

The chemist was a little taken aback, but recovered soon enough and asked,

'I'll take six boxes. That should last about a week,' said the nun.

The pharmacist was truly flabbergasted by this time and was almost afraid to ask any more questions. But his professionalism prevailed and he asked in a clear voice.

'Sister, what size condoms would you like? We have large, extra large, and the big liar size.'

The sister thought for a minute and finally said:

'I'm not certain, perhaps you could recommend a good size for a Camel?'