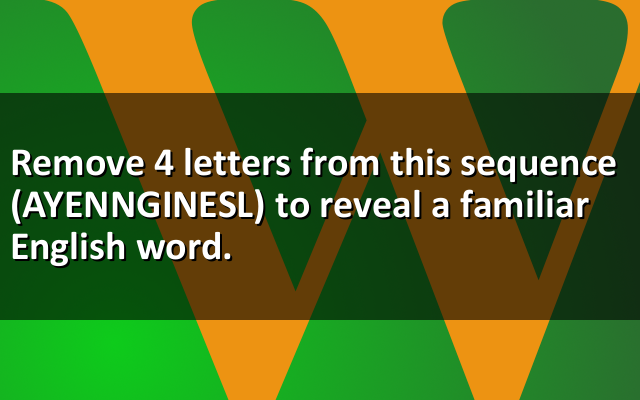 Remove 4 letters from this sequence (AYENNGINESL) to reveal a familiar English word.
Correct answers: 35
The first user who solved this task is Nasrin 24 T.
#brainteasers #wordpuzzles
Register with your Google Account and start collecting points.
User:
Check your ranking on list. Q: How many journalists does it take to screw in a lightbulb?
A: Three. One to report it as an inspired government program to bring light to the people, one to report it as a diabolical government plot to deprive the poor of darkness, and one to win a pulitzer prize for reporting that Electric Company hired a lightbulb assassin to break the bulb in the first place.
Q: How many computer journalists does it take to screw in a light bulb?
A: Five-one to write a review of all the existing light bulbs so you can decide which one to buy, another one to write a remarkably similar one in another magazine the next month, a third to have a big one come out on glossy paper two months later that is by then completely out of date, a fourth to hint in his/her column that a completely new and updated bulb is coming out, and the fifth to report a rumor that that new bulb is shipping with a virus.
Q: How many GLC workers does it take to change a lightbulb ?
A: Four. One to do it and three to go round putting up posters announcing that the GLC, working for London, is going to change the lightbulb.
Q: How many city planners does it take to screw in a light bulb?
A: Six - four to write an extensive study recommending a three-way 100/200/250 watt light bulb, one to write an article in the newspaper praising the study, and one to put in a 10 watt blub instead.
Jokes of the day - Daily updated jokes. New jokes every day.