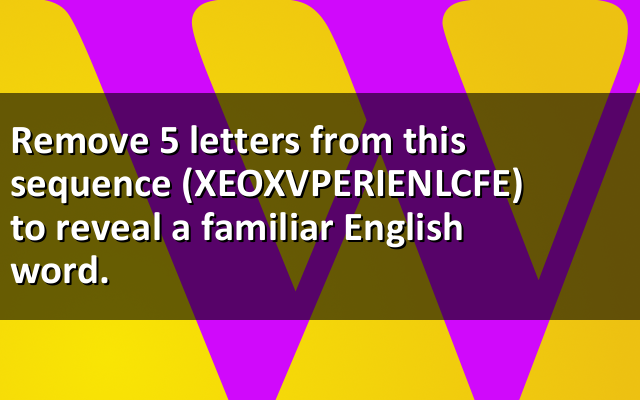 Remove 5 letters from this sequence (XEOXVPERIENLCFE) to reveal a familiar English word.
Correct answers: 49
The first user who solved this task is Linda Tate Young.
#brainteasers #wordpuzzles
Register with your Google Account and start collecting points.
User:
Check your ranking on list. Three men were talking about w...

Three men were talking about what their children would be saying about them thirty years from now.
"I would like my children to say, 'He was successful in business'," declared the first man.
"Thirty years from now," said the second, "I want them to say, 'He was a loyal family man'."
Turning to the third man, the first one asked, "So what do you want them to say about you in thirty years?"
"Me?" the third man replied, "I want them all to say, 'He certainly looks good for his age'!"
Jokes of the day - Daily updated jokes. New jokes every day.