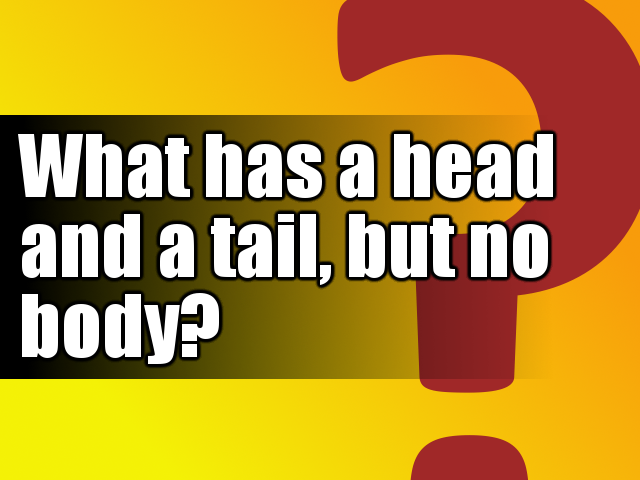 What has a head and a tail, but no body?
Correct answers: 92
The first user who solved this task is Sanja Šabović.
#brainteasers #riddles
Register with your Google Account and start collecting points.
User:
Check your ranking on list. The CIA had an opening for an assassin.
After all the background check, interviews, and testing were done, there were three finalists. Two men and a woman. For the final test, the CIA agents took one of the men to a large metal door and handed him a gun.
"We know that you will follow your instructions, no matter what the circumstances. Inside this room, you will find your wife sitting in a chair. Kill Her!!!"
The man said, "You can't be serious. I could never shoot my wife."
The agent said, "Then you're not the right man for this job. Take your wife and go home."
The second man was given the same instructions. He took the gun and went into the room. All was quiet for about five minutes. Then the man came out with tears in his eyes. "I tried, but I can't kill my wife."
The agent said, "You don't have what it takes. Take your wife and go home."
Finally, it was the woman's turn. She was given the same instructions, to kill her husband. She took the gun and went into the room. Shots were heard, one shot after another. They heard screaming, crashing, banging on the walls. After a few minutes, all was quiet. The door opened slowly and there stood the woman. She wiped the sweat from her brow.
"This damn gun is loaded with blanks", she said. "I had to beat him to death with the freaking chair."
Moral of the story: Women are evil. Don't mess with them
Jokes of the day - Daily updated jokes. New jokes every day.