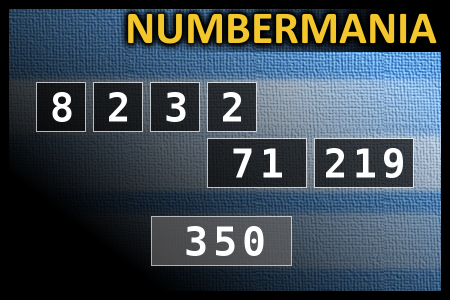 NUMBERMANIA: Calculate the number 350 using numbers [8, 2, 3, 2, 71, 219] and basic arithmetic operations (+, -, *, /). Each of the numbers can be used only once.
Correct answers: 33
The first user who solved this task is Sanja Šabović.
#brainteasers #math #numbermania
Register with your Google Account and start collecting points.
User:
Check your ranking on list. A college's student body is composed of the sons and daughters of the very rich who could not meet the academic requirements of any other college. Lo and behold, the college basketball team wins every game and dominates their league. All this success is due to one amazing player - a cross between Larry Bird and Michael Jordan.
This kid is terrific. The player and the team become the center of nationwide media attention. The student body is thrilled. Now, the NCAA goes to the college and asks for proof of this player's academic eligibility. The college administration promises such documentation in a few days. The faculty works night and day coaching the student for the crucial test.
The day of the public examination arrives, and the entire student body is there to support their star player. A professor stands, and announces the first question, "How much is five and two?" The student frowns in deep concentration - he thinks, he sweats, he shakes with effort. At last he shouts the answer, "SEVEN". The entire student body rises, and as a single voice, they cry. "Give him another chance. Give him another chance".
Jokes of the day - Daily updated jokes. New jokes every day.