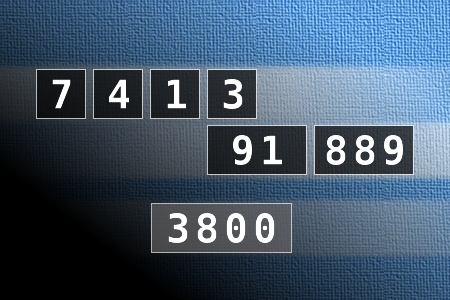 NUMBERMANIA: Calculate the number 3800 using numbers [7, 4, 1, 3, 91, 889] and basic arithmetic operations (+, -, *, /). Each of the numbers can be used only once.
Correct answers: 11
The first user who solved this task is Nílton Corrêa de Sousa.
#brainteasers #math #numbermania
Register with your Google Account and start collecting points.
User:
Check your ranking on list.

A Scotsman, American, and an Irishman are in a bar. They are having a good time and all agree that the bar is a nice place.
Then the Scotsman says, "Aye, this is a nice bar, but where I come from, back in Glasgow, there's a better one. At MacDougal's, you buy a drink, you buy another drink, and MacDougal himself will buy your third drink!"
The others agree that sounds like a good place.
Then the American says, "Yeah,that's a nice bar, but where I come from, there's a better one. Over in Brooklyn, there's this place, Vinny's. At Vinny's, you buy a drink, Vinny buys you a drink. You buy another drink, Vinny buys you another drink."
Everyone agrees that sounds like a great bar.
Then the Irishman says, "You think that's great? Where I come from in Dublin, there's this place called Murphy's. At Murphy's, they buy you your first drink, they buy you your second drink, they buy you your third drink, and then, they take you in the back and get you laid!"
"Wow!" say the other two. "That's fantastic! Did that actually happen to you?"
"No," replies the Irish guy, "but it happened to my sister!"
Jokes of the day - Daily updated jokes. New jokes every day.