CINEMANIA: Guess the movie title
Brain Teasers
[579] CINEMANIA: Guess the movie title - *********, a janitor at MIT, has a gift for mathematics but needs help from a psychologist to find direction in his life. Film was made in 1997. - #brainteasers #movie #film #cinemania - Correct Answers: 57 - The first user who solved this task is Sanja Šabović 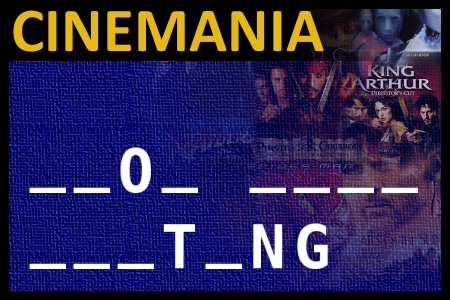 *********, a janitor at MIT, has a gift for mathematics but needs help from a psychologist to find direction in his life. Film was made in 1997.
Correct answers: 57
The first user who solved this task is Sanja Šabović.
#brainteasers #movie #film #cinemania
Register with your Google Account and start collecting points.
User:
Check your ranking on list. Bubba applied for an engineeri...

Bubba applied for an engineering position at a Lake Charles refinery. A Yankee applied for the same job and both applicants having the same qualifications were asked to take a test by the manager. Upon completion of the test, both men only missed one of the questions. The manager went to Bubba and said: "Thank you for your interest, but we've decided to give the Yankee the job."Bubba asked: "And why are you giving him the job? We both got nine questions correct. This being Louisiana, and me being a Southern boy, I should get the job!"
The manager said: "We have made our decision not on the correct answers, but rather on the one question that you both missed."
Bubba then asked: "And just how would one incorrect answer be better than the other?"
The manager replied: "Bubba, its like this. On question #4 the Yankee put down; "I don't know." You put down, "Neither do I."
Jokes of the day - Daily updated jokes. New jokes every day.