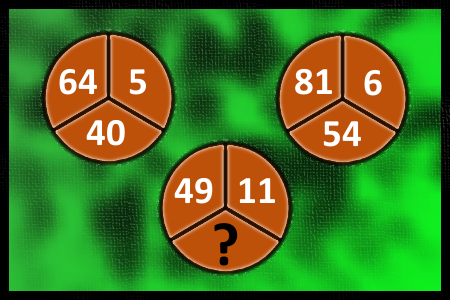 Which number should replace the question mark?
Correct answers: 349
The first user who solved this task is Eric Newton.
#brainteasers #math #riddles
Register with your Google Account and start collecting points.
User:
Check your ranking on list. The Parisian Belle And The Midwestern Salesman

The owner and head of sales of a large furniture store in the mid-west arrived in Paris on a buying trip. As he was checking into a hotel he struck up an acquaintance with a beautiful young lady. However, she only spoke French and he only spoke English, so each couldn’t understand a word the other spoke.
He took out a pencil and a notebook and drew a picture of a taxi. She smiled, nodded her head and they went for a ride in the park.
Later, he drew a picture of a table in a restaurant with a question mark and she nodded, so they went to dinner.
After dinner, he sketched two dancers and she was delighted. They went to several night-clubs, drank champagne, danced and had a glorious evening.
It had gotten quite late when she motioned for the pencil and drew a picture of a four-poster bed. He was utterly amazed and took her home. To this very day, he still doesn’t know how she guessed that he was a furniture salesman!