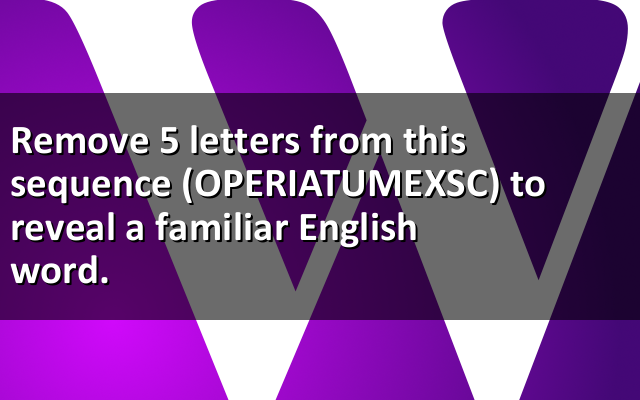 Remove 5 letters from this sequence (OPERIATUMEXSC) to reveal a familiar English word.
Correct answers: 32
The first user who solved this task is Fazil Hashim.
#brainteasers #wordpuzzles
Register with your Google Account and start collecting points.
User:
Check your ranking on list. A police officer responded to...

A police officer responded to a report of a barroom disturbance.
The "disturbance" turned out to be well over six feet tall and weighed almost 300 pounds. What's more, he boasted that he could whip the officer and the "Heavy Weight Boxing Champion of the World."
Said the policeman, "I'll bet that you're also an escape artist too, probably better than Houdini."
The giant nodded.
"If I had some chains," the officer continued, "you could show us how strong you really are. But all I've got is a set of handcuffs. Why don't you see just how quickly you can break out of them?"
Once in the cuffs, the man puffed, pulled and jerked for four minutes.
"I can't get out of these," the giant growled.
"Are you sure?" the officer asked.
The fellow tried again. "Nope," he replied. "I can't do it."
"In that case," said the officer, "you're under arrest."
Jokes of the day - Daily updated jokes. New jokes every day.