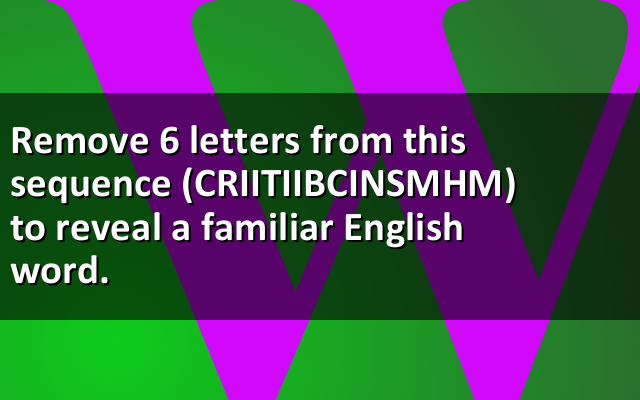 Remove 6 letters from this seq...

Remove 6 letters from this sequence (CRIITIIBCINSMHM) to reveal a familiar English word.
Correct answers: 36
The first user who solved this task is Nílton Corrêa De Sousa.
#brainteasers #wordpuzzles
Register with your Google Account and start collecting points.
User:
Check your ranking on list. A woman was having an affair while her husband was at work. One day she was in bed with her boyfriend when, to her horror, she heard her husband's car pull into the driveway.
"Oh My God - Hurry! Grab your clothes," she yelled to her lover. "And jump out the window. My husband's home early!"
"I can't jump out the window!" came the strangled reply from beneath the sheets. "It's raining out there!"
"If my husband catches us in here, he'll kill us both!" she replied.
"He's got a very quick temper and a very large gun! The rain is the least of your problems!"
So the boyfriend scoots out of bed, grabs his clothes and jumps out the window!
As he began running down the street in the pouring rain, he quickly discovered he had run right into the middle of the town's annual marathon.
He started running along beside the others about 300 of them.
Being naked, with his clothes tucked under his arm, he tried to "blend in" as best he could.
It wasn't that effective!
After a little while, a small group of runners, who had been studying him with some curiosity, jogged closer.
"Do you always run in the nude?" one asked.
"Oh yes" he replied, gasping in air. "It feels so wonderfully free having the air blow over all your skin while you're running."
Another runner moved alongside. "Do you always run carrying your clothes under your arm?"
"Oh, yes" our friend answered breathlessly. "That way I can get dressed right at the end of the run and get in my car to go home!"
Then a third runner cast his eyes a little lower and queried. "Do you always wear a condom when you run?"
"Only if it's raining."