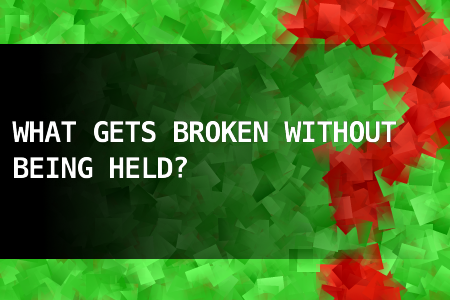 What gets broken without being...

What gets broken without being held?
Correct answers: 61
The first user who solved this task is Allen Douglas.
#brainteasers #riddles
Register with your Google or Facebook Account and start collecting points.
User:
Check your ranking on list. Two doctors were in a hospital...

Two doctors were in a hospital hallway one day complaining about Nurse Nancy.
"She's incredibly mixed up," said one doctor. "She does everything absolutely backwards. Just last week, I told her to give a patient 2 milligrams of morphine every 10 hours. She gave him 10 milligrams every 2 hours. He damn near died on us!"
The second doctor said, "That's nothing. Earlier this week, I told her to give a patient an enema every 24 hours. She tries to give him 24 enemas in one hour! The guy damn near exploded!"
Suddenly, they hear this blood-curdling scream from down the hall.
"Oh my God!" said the first doctor, "I just realized I told Nurse Nancy to prick Mr. Smith's boil!"
Jokes of the day - Daily updated jokes. New jokes every day.