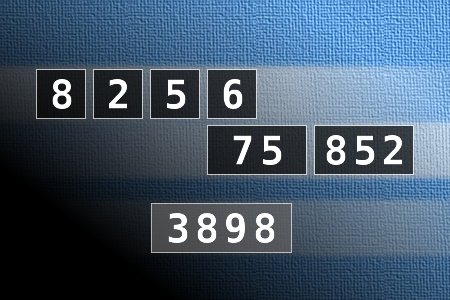 NUMBERMANIA: Calculate the number 3898 using numbers [8, 2, 5, 6, 75, 852] and basic arithmetic operations (+, -, *, /). Each of the numbers can be used only once.
Correct answers: 7
The first user who solved this task is Nílton Corrêa de Sousa.
#brainteasers #math #numbermania
Register with your Google Account and start collecting points.
User:
Check your ranking on list. Rescued on a Desert Island

when he notices an unusual speck in the distance.

“It’s certainly not a ship,” he thinks to himself.

As the speck gets closer and closer the man starts to rule out the possibility that it’s a small boat or even a raft.

Suddenly, emerging from the surf, is a beautiful blonde woman wearing scuba gear and a wet suit.

She approaches the man, who can’t believe his eyes.

“Tell me, how long has it been since you’ve had a cigarette?” she asks the man.

With that, the woman reaches over and unzips a waterproof pocket on her left sleeve and pulls out a packet of cigarettes.

The man takes one, lights it and takes a long drag.

“And how long has it been since you’ve had a sip of bourbon?” the woman asks.

Trembling, the castaway explains that it’s also been 10 years.

Sure enough, the woman reaches over, unzips her right sleeve and pulls out a flask.

The man opens it and takes a swig.

The woman starts unzipping her long zipper that runs down the front of her wet suit and looks at the man seductively.

“How long has it been since you’ve had some real fun?” she cheekily asks.

With tears in his eyes, the man falls to his knees and sobs.

“Dear lord! Don’t tell me you’ve got a Playstation in there!”

Lord! Don't tell me you've got golf clubs in there too!"

Oh good Lord! Don't tell me you've got a laptop?

Many similar jokes to this one online, with alternative punchline and a bit altered text, oldest one found on http://www.mnscuba.com , Scuba Jokes Forum page, posted by Punky Offline on February 25th 2003