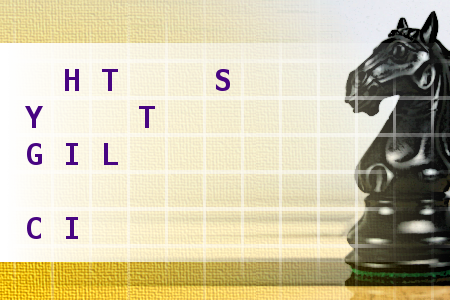 Find the title of movie, using the move of a chess knight. First letter is C. Length of words in solution: 4,6.
Correct answers: 22
The first user who solved this task is Nasrin 24 T.
#brainteasers #wordpuzzles #chessknightmove
Register with your Google Account and start collecting points.
User:
Check your ranking on list. Things You'd Never Know If It Weren't For The Movies

Large, loft apartments in New York City are plentiful and affordable, even if the tenants are unemployed.

One of a pair of identical twins is evil.

Should you decide to defuse a bomb, don't worry about which wire to cut. You will always choose the right one.

It doesn't matter if you are greatly outnumbered in a fight involving martial arts. Your enemies will wait patiently to attack you one by one...dancing around in a threatening manner until you have dispatched their predecessors.

When you turn out the light to go to bed, everything in your bedroom will still be clearly visible but slightly blue.

If you are blonde and pretty, it is possible to be a world-famous expert on nuclear fission, dinosaurs, heiroglyphics, or anything else, at the age of 22.

Honest and hard-working policemen are usually gunned down a day or two before retirement.

Rather than wasting bullets, megalomaniacs prefer to kill their enemies using complex machinery involving fuses, deadly gasses, lasers, buzz saws and hungry sharks, all of which will give their captives at least 20 minutes to escape.

During all crime investigations, it is necessary to visit a strip club at least once.

All beds have special L-shaped covers that reach up to the armpits of a woman but only to the waist of the man lying beside her.

All grocery shopping bags contain at least one French bread and one bunch of carrots with leafy tops.

It's easy to land a plane, providing there is someone in the control tower to talk you down.

If you are beautiful, your makeup never rubs off, even while scuba-diving or fighting aliens. However if you are overweight, your mascara will run and your lipstick will smear.

The ventilation system of any building is the perfect hiding place. No one will ever think of looking for you in there, and you can travel to any other part of the building without difficulty.

You're very likely to survive any battle in any war unless you make the mistake of showing someone a picture of your sweetheart back home.

Should you wish to pass yourself off as a German officer, it is not necessary to speak the language. A German accent will do.

A man will show no pain while taking the most horrific beating, but will wince when a woman tries to clean his wounds.

If staying in a haunted house, women must investigate any strange noises in their most diaphanous underwear, which is what they happened to be wearing when the car broke down.

If someone says 'I'll be right back', they won't.

Even when driving down a perfectly straight road, it is necessary to turn the steering wheel from time to time.

All bombs are fitted with electronic timing devices with large red readouts so you know exactly when they're going to go off.

A police detective can only solve a case after he has been suspended from duty.

If you decide to start dancing in the street, everyone around you will be able to mirror all the steps you come up with, and hear the music in your head.

Police departments give their officers personality tests to make sure each is assigned a partner who is their total opposite.

When they are alone, all foreigners prefer to speak English to each other.